I hope all of you had a great time for new years and that you have recovered by now, because I want to share a recipe with you!

This is one of the best things you can do with meat, at least in my opinion!

This is what you do:

Put salt and pepper on both sides of the meat. Take 1 piece of meat and coat it with 1 table spoon of mustard. Then put 1 or 2 slices of bacon on your beef, top that with slices of gherkins and onions, all evenly distributed. After that you roll it up and either fixate it with some string or little skewers. Now you just have to do the same for the other 3 pieces of Rouladen. 😄

Once they are all rolled and ready, you can heat the Oil in a deep pan/pot and fry the prepared Rouladen in there from all sides on high heat. Then throw in the remaining onion, that you didn’t use for the filling.

When that is fried up nicely you can pour in the wine and beef broth. The Rouladen need to be almost covered in liquid. Let it boil up once and then put it on medium heat with closed lid for 1 hour.

After that hour turn the Rouladen and leave the lid open, let them stew there for another hour.

Aaaand that is all. 😂

You can thicken the sauce and put some more spices in, but it usually has enough taste from the Rouladen in there.

I hope that every one of you had some amazing Christmas days, even if it wasn’t as big as we are used to!

For my Christmas dinner I made a dessert, that I’m quite proud of!

It was a chocolate dome with a vegan vanilla cream filling with a core of cherry-kiwi-compote.

To create the chocolate half sphere, you’ll need a silicone or three-piece mould and your favourite dairy free chocolate.

Melt the chocolate (in your microwave or in a water bath), layer it in your form (not too thick though, you still want to be able to break it with a spoon later) and let it cool in your fridge.

Whilst the chocolate is cooling, you can start preparing the vegan vanilla cream.

Soften your gelatine in cold water for 5 minutes. In a pod add milk, sugar, vanilla essence and bring to boil. Put the egg yolks in a bowl and add the vanilla milk, whip until creamy. Then add the softened gelatine sheets to this mixture. Let it cool down and add the whipped cream to it. Then it needs to rest for like two hours.

If you want you can already fill it in your chocolate half spheres at this point, or just leave it in a bowl to rest in the fridge.

The last thing you will need is the cherry-kiwi-puree.

I used half a glass of cherries and two fresh kiwis (without the skin obviously). To make sure that the vanilla cream wouldn’t get ruined by the kiwi acid, I boiled the cherries and kiwis before puréeing them. Once that cooled down a bit, I used a silicon mould with very small half spheres to freeze the purée.

After everything cooled and chilled enough, you just have to assemble it. Fill the chocolate with the vanilla cream and use two of the frozen purée half spheres and put them in the middle. Then arrange on a plate, and you’re done. Easy as that. 😂

Okay by now you might have figured out, that I totally love our slow cooker!

Don’t think that I regret this, quite the opposite is true. I love my slow cooker. Whenever I cook with it I can usually freeze 2-4 portions and it’s saving so much time for me!

So the other day I had my aunt and uncle coming over from Germany to stay with us for a few days, as the builders just finished their repair work, there was a lot to clean and tidy up again. Which is where the slow cooker comes in handy again, as I don’t need to check on it every five minutes. I even sometimes forget that the slow cooker is on until I can smell the food. 😍

As my family was arriving in the evening I wanted to have a quick dinner ready for us, without standing in the kitchen for 30 minutes or more first.

This is what I did:

You just need 1 red onion (sliced), 5 potatoes (I use red potatoes as I like the taste and texture of them the most) ,7 carrots, 3-4 chicken breasts and two cups of chicken or vegetable broth. This time I used vegetable broth, but it’s really up to you and your taste buts. 😉

Place the vegetables on the bottom and put the chicken breasts on top of it. Pour over the broth of your choice and let it sit on low for 6-7 hours, make sure that the chicken is completely done before serving!

and I finally got to use my new, big slow cooker again. 😍

Unfortunately it seems like summer is over, but it is no reason to be sad as autumn is just around the corner, for comfy food like soups, stews and pies.

So let’s start off in this comfy season with a Butternut Squash – Sweet Potato Soup made in the Slow Cooker. Of course you can also just cook the soup in a pot, but I personally prefer the slow cooker as I can just turn it on and do other stuff whilst the soup is getting ready, without me needing to worry about burning and over floating of the pot.

So you know this feeling when you check out new recipes that you want to try and then it requires Buttermilk.

Luckily it is super easy to make your own Dairy-free Buttermilk. 🙂

All you need is about 250 ml of your favorite Dairy-free milk and mix it with 1 Tablespoon of fresh lemon juice (or Apple Cider Vinegar, that’s up to you).

Let it sit for about 10 minutes and you have the same consistency as normal Buttermilk, so that your cooking and baking can start and the results can be awesome! 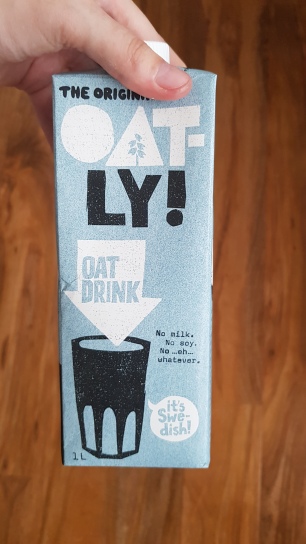 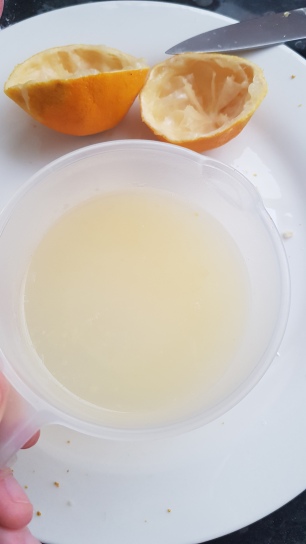 Enough sweet things for now, let’s get started on something savory!!!

Gather your ingredients:
Just look at how yummy it’s going to be: 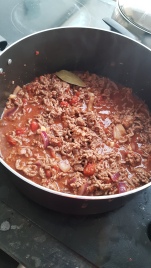 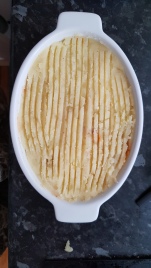 So now put the work in and enjoy your meal!
1. Heat up a pan with a little bit of Olive Oil and put the onions & garlic in the hot pan until they are softened (about 3 to 5 minutes) and put on your Kettle on.
2. Put the softened onion and garlic in a big pot and use the pan to fry up the minced beef.
3. Whilst the beef is frying , you can already add the chopped carrots, chopped tomatoes, Worcestershire sauce, beef stock and bay leaves to the pot with the onions.
4. Once the beef is finished add it to the big pot and get everything to boil.
5. After that put your stove on low-medium heat and let it sizzle for 45 minutes.
Whilst we are waiting for the meat sauce to be done, let’s do the mashed potatoes:
6. Cook the potato chunks until they are done, but not too soft and drain off the water.
7. Add 3 tbsp of Oat Milk and 1 tbsp of vegetable margarine spread.
8. Mash it all together to get a slightly creamy consistency.
9. TIP (from my mum): Add a little bit of salt and NUTMEG to the mashed potatoes for really good taste!
10. Once the meaty bit has been simmiring long enogh you can put it in your favorite pie form and spread the finished mashed potatoes over it. You can even put on some sort of design on the mashed potatoes with a fork.
11. Put the pie in the pre-heated 160C Fan oven for about 15 minutes or until you get a nice golden colour on your mashed potatoes.
Thats’s it, you’re finally all done! Enjoy your meal!!!